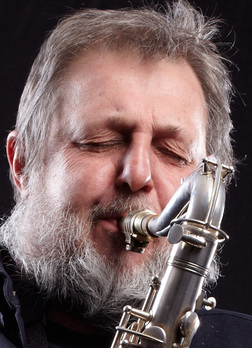 Paul Dunmall has a long and prolific career that spans more than thirty years, and a wealth of playing experience. In his formative years he spent some
time in the States playing with Johnny 'Guiar Watson, and studied and played with Alice Coltrane.

In the late seventies and eighties he was a member of the Bristol based group Spririt Level with whom he recorded several highly regarded albums. After 10 years together the group disbanded, and Dunmall went on to follow his own  path and his interest in the freer end of the jazz spectrum.

With a sunstantial discography under his own name, Dunmall has forged a career that has been uncompromising yet steadfastly followed his own muse. He has forged powerful musical allegiances with fellow inmprovising musicians such as Simon Picard, Keith Tippett, and the late Tony Levin.

Throughout his career he has made no secret of his admiration and devotion to the work of John Coltrane, and has a new CD Tibute To Coltrane released this month (see July's CD Reviews).

Of his all time top ten favourite albums, Paul says: 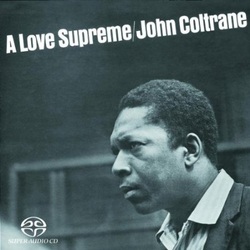 JOHN COLTRANE  - A Love Supreme
This Iconic recording is one of the greatest musical statements of the 20th century.

JOHN COLTRANE -  Sunships
I love this recording as much as A Love Supreme. It's actually more
intense with Coltrane playing so strong. It doesn't get any better than
this.

JOHN COLTRANE - OM
For many people this is a very difficult recording to listen to ,a step to
far, but listen to Coltrane’s solo, it's astonishing .It seems to me he wants to bring a glimpse of the spiritual world here to Earth and is summoning up all his powers to do so. 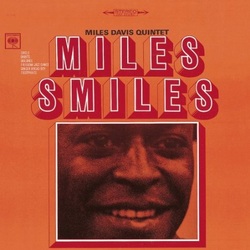 MILES DAVIS – The Complete Live At The Plugged Nickel
For my top ten favourite albums I could have chosen all Coltrane recordings but just to make it a more balanced I've chosen some other works. This box set seems to me to be the end of playing the old standards as a cutting edge art form .They take them to pieces and play them very open but still keeping the flavour of the tune, fantastic playing by all.

MILES DAVIS – Miles Smiles
Just one of the great Miles recordings using Wayne Shorter’s  material. I could have easily picked ESP or any of those great quintet
recordings.

DEXTER GOTDON – Doin’ Alright
Again I could have chosen any of Dexters Blue Note recordings, but perhaps this is my favourite one. What can you say one of the greatest tenor saxophone sounds ever produced. 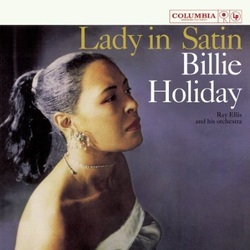 SONNY ROLLINS – Sonny Rollins Plus 4
Sonny with the great Clifford Brown, jazz with a capital J.

LOUIS MOHOLO  - Sprits Rejoice
This is a personal milestone for me. When I heard this for the first time I couldn't believe it, this was jazz music but it wasn't sounding at all like
American players. This record changed the way I thought and played music.

CHARLES MINGUS - Mingus, Mingus, Mingus
This swings like the clappers,great big band with great solo's and great
spirit in the music.

BILLIE HOLIDAY - Lady In Satin
If jazz music is to manifest your feelings to an audience this record must be one of the greatest,it can be painful to listen too but somehow it is a sweet pain that goes to the soul where almost the pain dissolves in beauty. 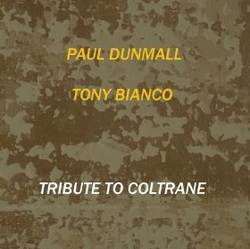 Tribute to Coltrane by paul Dunmall and Tony Bianco is available from SLAM Productions.

Read a full review of the album in July's CD Reviews.