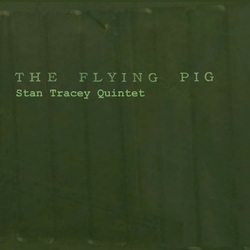 So long has he been such an important and vital force in British Jazz it is difficult to believe that Stan is now well into his eighties. That he is still playing is testament to his dedication to his craft and passion for music, but that he still plays and writes such exciting and invigorating music is a mark of his stature and high regard that he is so rightly held.

This new album, featuring Stan's quintet and released on his ReSteamed imprint, blows in like a breath of fresh air and reminds one of just why this wonderful music retains it's vitality and validity into the 21st century. Dedicated to the memory of Stanley Clark Tracey, Stan's father and Clark's grandfather and those who fought in the first World War, the music rather than taking at a forlorn and sorrowful look at those terrible times in the trenches endured by many, instead basks in the more humorous side capturing the Britsh spirit and the 'Tommy' humour of the times.

For those questioning the somewhat curious title, 'The Flying Pig' is a reference to the 9.45 inch heavy mortar that was used by the British army. Other tracks utilise such wonderful titles such as 'Bouncing Bertha' the original term for the German 42cm Morser and 'Weary Willie' which was the description for a German shell passing safely but slowly overhead.

Stan's writing for the quintet is suitably tough and muscular and swings with a vengence, a trait which sometimes seems to be disappearing from much contemporary jazz. As is appropriate to the titles, the music whilst serious in intent and delivery does not suffer from an over emphasis on the weight of the history of its inspiration, but revels in the humour that the titles depict. Saxophonist, Simon Allen can barely contain his exuberance in his solos with his sure tone and timing, with a debt to Charlie Parker and Cannonball Adderley clearly audible. This is not to say that Allen's solos have nothing new to say, but have a healthy regard for the tradition of his instrument, and are delivered with a vibrant delivery that is truly infectious. The flugelhorn and trumpet of Mark Armstrong , as with the best two-horn frontlines, provides the perfect foil to the quicksilver solos of the saxophonist, and lays out his solos in a most logical, if more laid back and considered manner that is equally as satisfying.

Stan is Stan throughout. With his by now familiar sound at the keyboard that still throws up musical gems in both solos and in his accompaniment. As for the compositions, in my opinion he saves the best until last, with the beautiful 'Ballad For Loos', with a particularly fine solo from the leader, and the superb 'Silent Percy' featuring Armstrong's furiously contained muted trumpet in the opening theme, before giving way to alto and open horn solos that are brim full of ideas.